The host with the most

Our friends living abroad have shaped our travel experiences, particularly in large cities, by giving us more insight into local culture than we could ever get on our own and by sharing recommendations of their favorite neighborhoods, sights and restaurants.

In Vietnam, we met up with our friend Henry, who was a section-mate and friend of my sister from business school. After graduating from business school, he moved to Vietnam to start a telecom business, launched and invested in several businesses since, and is now managing a venture capital fund in Vietnam. Despite the fact that we almost made him miss his flight to Hanoi the day we arrived in Saigon and that we are traveling in a group of six currently, Henry has been an amazing host (check out the pic of him on a moto-taxi rushing to the airport!). He drove us all around Saigon, took us to a home-style Vietnamese restaurant, showed us an evening of unforgettable drunken karaoke, invited us to his company lunar new year party, took us to his amazing restaurant Vine and patiently answered our never-ending questions about culture, politics and business. 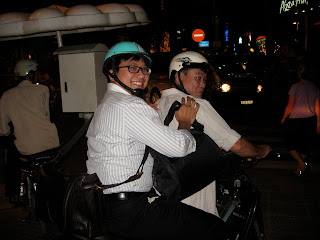 It was particularly interesting to hear Henry’s perspective on investing in Vietnam. The country’s 10-year average GDP growth rate is estimated at 7-8%, but because of its size (86 million population) it is never mentioned in the same breath as India and China. Henry sees Vietnam as exactly where Japan and China were 30 years ago, and hence his investment strategy is based in part on case studies of successful businesses in those regions. Given the growing middle class with increasing disposable income his most active investment areas are consumer, media and online businesses, and since we've both spent a little time in these sectors we had a great time chatting about his investments. We thought some of the most exciting businesses in his portfolio are YAN music television network; Xalo, an online search business modeled after Baidu; Vinabook, an online retailer similar to Amazon.com; and VinaGame, a leading Asian gaming business. Can't wait to see him again when we return to Saigon!
Posted by kruti at 12:26 AM