We left winter in China for heat and humidity in Vietnam. Feels good to be “on vacation” again. My brother Jay and sister-in-law Tonia joined us from Seattle for the second time on the trip (they’re both working on negative vacation days this year), and our cousins Pooja and Tina from Chicago joined us as well for ten days in Vietnam and Cambodia. It’s been a treat to meet up with our siblings, friends and extended family in far-flung places! 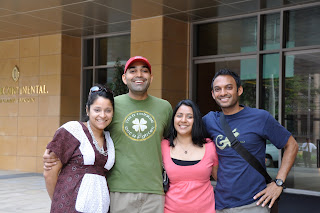 We arrived in Ho Chi Minh City (also known as Saigon) and at the airport learned that the Vietnamese currency is called the dong and the exchange rate is US$1 = ~18,500d. We wanted to withdraw around $100 and calculated that should equal approximately 2,000,000 dong, but as I typed in the zeroes I became nervous that we had miscalculated and added an extra zero or two and that we would have $10,000 in dong instead of $100. Could that be right? 2,000,000 dong? Talk about hyperinflation. I canceled the transaction, recalculated a few times, and finally withdrew two million dong. Here’s comedian Russell Peters on the Vietnamese dong.

Food in Vietnam has been a highlight. My favorites have been the spicy vermicelli with grilled pork & fried spring rolls (Bun Thit Nuong Cha Gio) at Quan An Ngon and the sweet, condensed milk-laden Vietnamese ice coffee ca phe sua da at Café Givral (Kruti and I were planning to share one but it was so good that I slurped it all up before she could even try it and we had to order another one). Definitely going back for more.

The two sights we visited in Saigon were both related to the Vietnam War; it was fascinating to learn about the war from the other perspective. The War Remnants Museum, documents the atrocities of the war and displays brutal photographs of some of the war victims – those who suffered torture as well as those who were born with birth defects caused by the use of defoliants (Agent Orange). Sure it’s a bit propagandist in tone but it’s stuff I didn’t read much about in U.S. history books, what exactly is true I have to do more research on.

The Cu Chi tunnels were even more instructive. The people of Cu Chi (a small village 30km from Saigon) began digging the network of tunnels in the 1940s, during the French occupation; during the Vietnam War it became a Viet Cong stronghold, and by 1965 they had burrowed more than 200km of tunnels. During raids or when Americans were nearby, everyone would scramble belowground through concealed entrances, while above, enemy soldiers would find themselves in a suddenly abandoned jungle. The ones that did discover the tunnels almost certainly died either because they couldn’t find their way out or at the hands of the Cu Chi warriors hiding underground. The tunnels are extremely claustrophobic (some only 30 inches wide) and it’s amazing how anyone could endure living in those tunnels sometimes for days waiting for an all-clear signal. The most enlightening facet of our visit was learning about the ingenuity of the farmers and peasants of Cu Chi – they designed and laid painful-looking homemade booby traps fashioned from bamboo and the recycled iron of U.S. artillery pieces, they made shoes from the used tires of U.S. army vehicles and shaped the heels larger than the toes so that their footprints made it look like they were going in the opposite direction than they actually were, and many other tactics. The people of Cu Chi were scrappy. Startup scrappy. It began to make more sense how the Viet Cong guerillas were able to match up to the U.S. armed forces and defense budget.
Posted by vipin at 11:20 PM