We arrived in Hong Kong to overcast skies and drizzle after being spoiled by the sun and warm weather in Mumbai for the past few weeks. Though we’ve heard the views from Victoria Peak can be amazing and there are terrific hiking opportunities around the island, we decided to hold off on both until returning to Hong Kong after traveling in China in hopes that we’d meet with better weather. Instead we spent a lot of time indoors hanging out with Stella, a close friend and classmate of Vipin’s from high school, her husband Guy, and their adorable newborn Max, who were kind enough to let us stay with them. 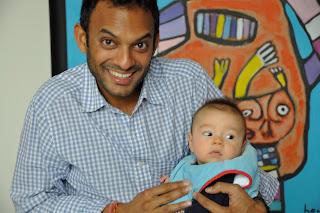 We also spent some time exploring one of HK’s most famous attractions, its many shopping malls, which was a perfect escape from the weather and a good introduction to the city which boasts more shopping malls per square foot than any other city (or so we’re told). We did manage to explore a few other neighborhoods despite the weather. The first evening we walked around Lan Kwai Fong, known for its buzzing nightlife scene and ended the evening at a club called dragon-i that Vipin remembered from his last visit, which was hopping, especially for a Monday night. The following day we took the Star Ferry across Victoria Harbour from which you can really appreciate the beauty of the HK skyline and walked around Kowloon and the Temple Street Night Market before meeting back up with Stella and Guy in Soho.

Aside from sharing hip neighborhoods named Soho, tons of high-end shopping and sky-high real estate prices, HK reminded me most of NYC for its incredible energy and vibrance. I’m excited to see more when we return!
Posted by kruti at 8:11 PM