Just arrived in Cairns, Australia, home to the clear blue waters of the Great Barrier Reef (which we could see from the airplane window!). The commencement of the last segment of our trip (Australia and New Zealand)...the beginning of the end as it were. After traveling in Africa and Asia, Cairns looks/feels like we’ve arrived at a country club – green grass, wide streets, and generally vast space. A friend mentioned that Australia would be a good place to transition back to the U.S. Based on the strip malls in Cairns, we think she was probably right. 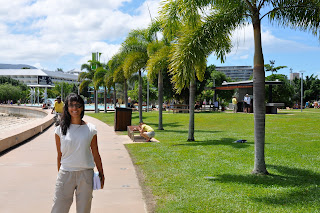