The Temples of Angkor 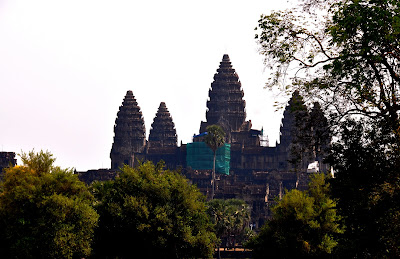 My first trip to Cambodia was in 2001 with my sister, Priti, and 15 of her closest friends from Kellogg Business School. I remember being awed by Angkor Wat – its scale, history, symbolism and idyllic setting – so I was excited to see it again with Vipin. Perhaps not surprisingly given my expectations, I was a little bit disappointed, at least initially. The big differences that had an impact on my experience were the sheer number of tourists and the changes made at Angkor Wat to accommodate them. My favorite memory of my last trip was of climbing up the narrow stone steps to the top of the highest tower and enjoying the serene beauty of the temple and its surroundings. Unfortunately, now the stone steps are covered by a wooden staircase and wooden railings/walkways have been built throughout the tower for tourist safety, making it so much harder to imagine how Angkor Wat felt as a place of worship hundreds of years ago. And of course the scaffolding over parts of the temple and wall carvings for restoration is always an eyesore (though necessary, I understand). Luckily we returned to Angkor Wat on our last day to watch the sunrise over the temple and walk around without droves of tourists around – I was inspired all over again.

The part of Angkor Wat that I was amazed by initially and that hasn’t changed at all is the enormous wall carvings depicting scenes from the Ramayana and Mahabharata, two great Hindu epics. Though I’ve seen many beautiful carvings at temples in India and the US, it was incredible to see the influence of Hinduism in this part of the world. Angkor Wat was initially designed by King Suryavarman II and dedicated to Vishnu, though the temple was later converted to a Buddhist temple. More on the history of Angkor Wat here and here.

Beyond the temple, the town of Siem Reap has changed considerably. In 2001 Siem Reap still felt relatively unmarred by tourism. Cambodia only reemerged as a major tourist destination again at the end of the 1990s, after the devastating genocide under the Khmer Rouge and the Civil War that followed ended. Though this period in Cambodia’s history was bleak, the country is now a highlight in the Southeast Asia travel circuit and has benefited greatly from the influx of tourism-related revenues. The downside is that Siem Reap is now full of hotels and souvenir stalls, taking away from the charm of the town.

We only spent three days in Siem Reap, but were able to visit several ancient temple complexes. None of the other temples attract as many tourists as Angkor Wat, so you still feel a bit like an explorer climbing around the ruins. Our three favorite temples were Bayon, Banteay Srei and Beng Mealea.

Bayon has a distinctive design with 216 gigantic faces across 54 towers so you can see a face from any angle (and they can see you). It looked particularly cool in the early morning sun. 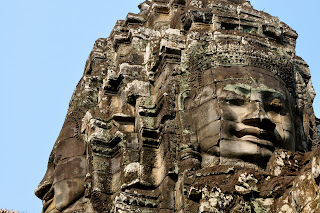 Bantey Srei, is referred to as the “jewel of Khmer art” because of its intricate carvings and was particularly interesting because it was dedicated to Shiva (unlike most of the temples which were dedicated to Vishnu). The name of the temple means “citadel of women,” probably because the carvings are so fine they could only have been carved by the hands of women. 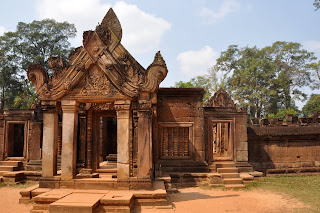 Beng Malea is about 40km from Angkor Wat and you have to travel some rough roads to reach there, but it's totally worth the effort. The temple has been “embraced” by the jungle and is largely unrestored, so you can climb over the enormous stone piles and through rooms overrun by tree roots. 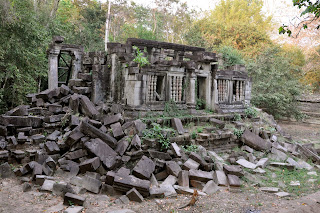 An amazing place I would definitely recommend to anyone!
Posted by kruti at 10:30 AM