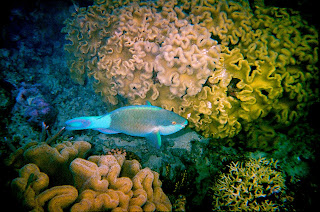 We spent the past two days living aboard a sailboat and diving at the Great Barrier Reef. The Great Barrier Reef is the world's largest coral reef system composed of 2,900 separate reefs that form an outer ribbon parallel to the coast that stretches 2,300km from south of the Tropic of Capricorn to the Torres Strait south of New Guinea, and 80km at its broadest; and it's estimated to be between 600,000 and 18 million years old. They say you could dive here everyday of your life and still not see the entire Great Barrier Reef; we chose to get up close and personal with an outer reef called Thetford Reef, about 20km from the continental shelf where the ocean dips down from around 30 meters deep to 2,000-3,000 meters. I experienced some problems trying to equalize my ear pressure underwater which made my first few dives a little bit painful, but the spectacular kaleidoscope of colors was a good distraction. We saw dolphins, giant clams, sea cucumbers, a large sea turtle, and many different species of fish and types of coral. Kruti and I were diving separately (I was already certified and she was with an instructor) but on the second morning we had an E.T. moment when we found each other underwater, grasped hands and made alien-like sounds of contentment through our regulators. 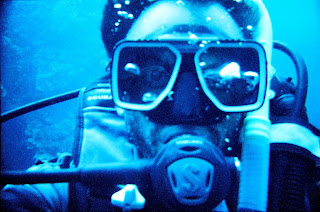