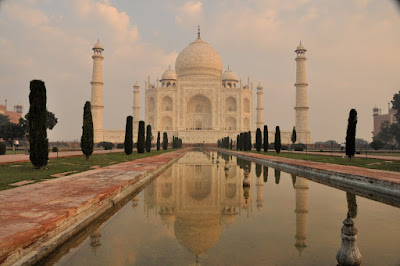 The disparity between entrance fees for Indians versus foreigners at the Taj Mahal is appalling: INR20 for Indians (US$0.40) and INR750 for foreigners (US$15). So of course we purchased the Indian tickets at the ticket counter. One of the most interesting parts of traveling with Vipin’s family over the last few weeks has been the experience of traveling as an Indian tourist vs. as an NRI (non-resident Indian) – we hired Hindi-speaking guides, ate at the local favorite restaurants, and purchased Indian tickets for all the sites we visited. The Taj Mahal was our fist excursion without any family and the lines for men and women were separate, so guess who got busted – yours truly. The ticket collector just looked at the ticket, looked at me, and then started yelling at me to go back and buy a foreigner ticket. I made the mistake of trying to argue in Hindi instead of Gujarati and had no Indian ID. What’s worse is that I had no phone or money on me, so I had to flag Vipin down, who had gotten through with no problem and we both had to buy new tickets. I was totally dejected after the experience and couldn’t stop thinking about all the arguments I should have made... I've never felt so bad about spending $30.80.

On a brighter note though, the Taj Mahal itself was amazing. I had visited last over twenty years ago, so I felt like I was seeing it again for the first time. It’s impossible not to be moved by the depth of Shah Jahan’s love for his wife Mumtaz which inspired the creation of the Taj. The monument is so majestic in its beauty and we could have spent the entire day just looking at it and taking photos of course, but alas, we only had two hours before we had to catch our next train.
Posted by kruti at 11:21 PM