Saved by a helmet

My cousin Ashish was in a motorcycle accident last night on his way home from the movie. We received a call from the hospital at 3am instructing us to get there immediately. It was terrifying. Hate to receive calls like that. When we arrived they were doing a CT scan of his brain. We spent the entire night and all day at the hospital, and 24 hours later the doctor was able to declare with confidence that Ashish was going to be OK. Luckily he was wearing his helmet because the doc said it's unlikely he could have survived otherwise. It was a frightening reminder of how dangerous the roads in India can be, particularly on a motorcycle. Thank God Ashish is OK. 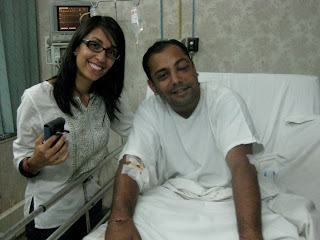