Eye of the Tigress

Ranthambhore is a national park in Rajasthan famous for its tiger population. Our good friends Arjun and Manisha who live in Washington, DC had planned a trip to Ranthambhore and Kruti and I piled on because it was an opportunity to see our friends after many months and that too in an exotic new location. Moreover, I had wanted to visit the park since I first heard about it when I was living in Mumbai eight years ago, and the dates worked out perfectly. Our friends Utsav, Sunil, Sunil's mother and Arjun's mother also joined the party!

Kruti and I had seen lions, leopards, and a cheetah in Africa, and we were extremely excited to see a tiger, largest of all the big cats, in India. It was our first wildlife experience in India. Our visit to Ranthambhore National Park was very different from our experiences on African safaris - it was much more chaotic with the drivers and guides all shouting at each other to move out of the way so that their clients could get the best photos. But the disorder was tempered by the anticipation that the tiger park would deliver its ultimate prize.

Tiger tracking is all about reading the cats' pug marks imprinted on the sandy paths and interpreting the nuances of the alarm calls issued by the other jungle animals. But often the predator remains deep within the forest so you never see what the "caller" has spotted particularly because the park doesn't allow any off-roading. My cousins and friends had told us their Ranthambhore stories about many failed attempts to find the tigers they were hoping to see. Upon our arrival at the luxury jungle camp Khem Villas, we even met a couple from the UK who had been in Ranthambhore for four days and had not succeeded in seeing a single tiger. But we remained hopeful. Part of me enjoyed the fact that it wasn't guaranteed, that the drivers and guides didn't know where the tigers were ahead of time, that the animals had right of way and we were reduced to the role of true bystanders. Luckily it all fell into place for us.

On our first game drive we spotted two tigers resting in the undergrowth close to the track. They were taking a post-coital nap so they weren't moving much but still we all fell under the spell of these beautiful creatures. We were assigned the same zone of the park on our second drive so we went back to find the same two tigers resting where we had left them in the morning. Apparently they were waiting for us too because soon after we arrived the male tiger got up and walked within meters of our open jeep. The tigress followed, all feline grace in her elegantly striped, bright gold coat. We held our breath, astounded by their presence. They exuded the strength and power of a lion combined with the stealth and beauty of a leopard. The ultimate big cat. Before we knew it the moment had passed and the tiger show was over, but we did get an awesome shot of the tigress looking directly at us. 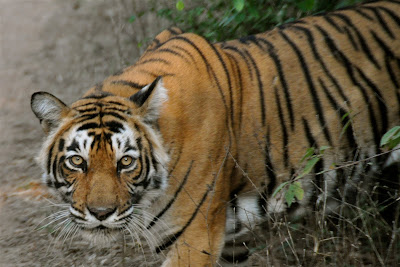