Welcome to Jodhpur, the Blue City

This is our first trip to Rajasthan together since we got married so we have been meeting/visiting a lot of family, particularly in Jodhpur where most of Vipin’s dad’s family lives. They all gave me such a warm welcome, including planning a fabulously fun party on the rooftop of an old fort-turned-hotel, complete with dancing, drinks and fireworks! 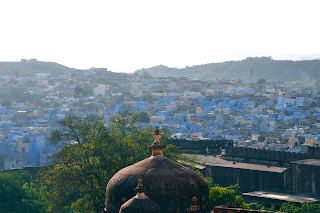 We made some time for sightseeing around the city as well. Jodhpur is called the Blue City because of the blue-tinted whitewash used on most of the houses in the old city - the view of it from Mehrangarh Fort is particularly striking. The museum in the Fort is one of the best we’ve seen with a great collection of palanquins, miniatures, and an amazing collection of traditional royal clothing (which I’d love to have if any of it were for sale). We also visited the Chamunda Devi temple within the Fort, which attracts tens of thousands of visitors on Dussehra, and was the site of a tragic stampede in 2008. The other highlight of our time in Jodhpur was our visit to Vipin’s grandfather’s home (and where his father grew up) in the old city. Check out the photos.