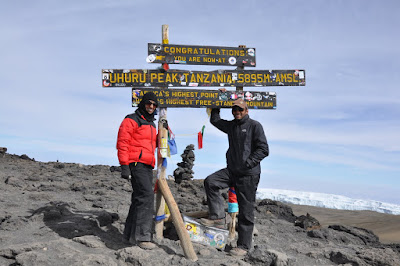 Climbing Mount Kilimanjaro was truly the most difficult physical challenge I have ever experienced. I feel like Kilimanjaro is “marketed” as a mountain anyone can climb. Frankly, I’m shocked that so many people actually climb this mountain every year. It was extremely difficult. And I consider myself relatively physically fit.

Day 5 of our trek – allow me to set the scene. First, the altitude had been causing headaches, loss of appetite, and seriously irregular digestion; hence we hadn’t eaten much of our last few meals so we didn’t have much energy to start the final ascent. Second, the summit ascent is by torchlight and you leave at midnight and arrive in the midmorning, so add sleep deprivation to the mix. Third, you have to trudge up loose volcanic scree (did I mention in the dark?) which means every step up is also half a step back down. Fourth, the air at the top contains only 50% of the oxygen of air at sea level, so just breathing is challenging. And fifth, it was freezing. At the summit I noticed that the corners of Kruti’s lips and eyes had a bluish tint due to lack of oxygen. That day my pulse had been more than 120 beats per minute for at least 12 straight hours (not sure whether that is good or bad for my health).

But six hours into our final ascent as the sun rose over the jagged peaks of Mawenzi and the bed of clouds below, I started to feel emotional and tear up. It was probably due to the combination of sleep deprivation and physical exhaustion, but it was also one of the most spectacular views I have ever seen. It was uplifting, and it gave me a second wind. At 9:20am we finally made it to Uhuru Peak, 5895 meters/19,345 feet, the highest point in Africa. Adrenaline and determination got us there, but once there I had little motivation and energy to come back down. As we started our descent our guide Mussa asked if I was feeling ok, and I replied, “Yes, why, don’t I look ok?” (I thought, perhaps the color of my face had turned from brown to a smurf-ish blue). Mussa responded, “You’re walking like a drunk man.” I don’t remember ever feeling so extremely tired, weak, and completely used up. Luckily we could ski down the volcanic scree so what took us nine hours up only took three hours down. And then we had to walk another 3-4 hours to our next campsite. Brutal.

We’ve been talking about our climb pretty much everyday since. It was one of those experiences. Kruti and Salil agree with the consensus – happy they did it, but they would never do it again. Me? Perhaps it was because my altitude sickness was milder or because my memory is shorter, but if Jay (my brother) wanted to climb Kilimanjaro and needed a companion, I’d do it again. 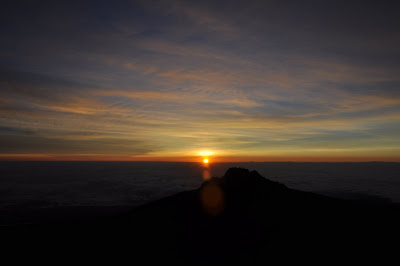