Experienced something new Monday night. I passed out, and not due to inebriation. It was hot and humid in Dakar and I had been feeling a bit nauseous most of the afternoon; Kruti and I had just finished dinner and I got up to wash my hands. All of a sudden I felt lightheaded and dizzy, everything started to whirl, and the next thing I knew I was lying on the floor and Kruti was desperately trying to bring me back to consciousness. It was scary at the time, not so much for me but for Kruti. I imagine how I would have felt had I seen her collapse to the floor and stare blankly at the ceiling like I did. Anyway, 20min under a fan and I was feeling fine, almost back to normal. My brother-in-law Vivek diagnosed that it was likely a vagal response, perhaps triggered by hyperthermia and dehydration. Crazy. Never heard of it before.

The more interesting story was the chain of events that followed. Kruti’s sister Riti suggested we see a doctor just to check blood pressure, EKG, etc., and our host Elya recommended the clinic SOS Medicin because the doctors speak English. There I had a consultation with an outstanding doc (best bedside manner I’ve encountered) who confirmed that all tests were normal and independently diagnosed that it was likely a vagal response. While the doc was trying to shave a few patches of my chest hair to get the EKG sensors to stick, Kruti was admiring the artwork in his office. We saw similar paintings throughout the clinic and later when we asked the receptionist where we could find artwork like that in Dakar, he made a few phone calls and soon we were ushered upstairs to meet the clinic’s proprietor Vasenta.

Vasenta is a South Indian woman (the first Indian person we met in West Africa) who was studying/practicing law in France where she met/married a Senegalese doctor 15 years ago and decided to move to Dakar and start a clinic together. All of the paintings in the clinic were by the same local Senegalese artist named Serimacen, and Vasenta and her husband had another collection at home. They were big fans. And so were we. So Vasenta offered to connect us to Serimacen, and the next day we spent a few hours with him at his atelier, looking at his paintings and listening to his stories and inspirations. Fantastic guy.

Serimacen paints about “the struggles of Africa,” and women are the main subjects of his paintings. The one we liked best was a painting of a woman and her two daughters standing at the sea and contemplating their son/brother who had just left by boat to try to find work in Spain. There’s a sadness in their expressions because they know that most young men don’t make it since they’re turned back at the coast and many die at sea in their small fishing boats. Serimacen asserted that this still remains a huge problem in Africa. We liked the painting so much we bought it, along with the story – our story of meeting Serimacen. 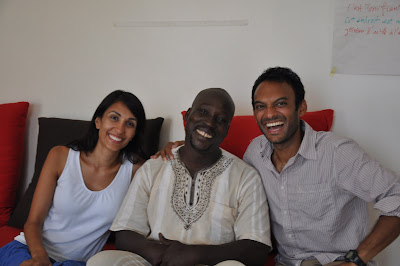