Land of a Thousand Hills 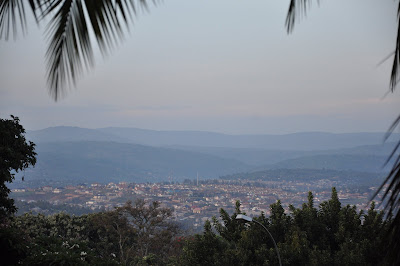 We arrived in Kigali a few days ago and love it here! The country is absolutely beautiful with lush, green, rolling hills everywhere and the weather has been wonderful – 80 degrees F and sunny during the day punctuated by short rainstorms (currently in the rainy season) and 65 degrees at night. Kigali is cleaner than most U.S. cities and the quality of the infrastructure is outstanding – without a doubt the best roads we’ve seen across Africa. We’re staying at Vipin’s friend’s house with him and his incredibly warm and welcoming housemates, and they have made our stay in Kigali that much more enjoyable. Rwanda is definitely one of the loveliest places we’ve visited so far.

Rwanda has come a long way since the terrible genocide of 1994, when almost one million people were murdered over a period of 100 days. Under the leadership of President Paul Kagame, the country has made significant strides in economic development and is now being called the “Singapore of Africa.” Though 20% of the country’s income still comes from foreign aid, the government is focused on promoting direct investment, and private sector reform has decreased Rwanda’s dependence on aid. One of the biggest success stories so far is Gahaya Links, a company that sells Rwandan peace baskets made by women survivors of the genocide. The country’s economic plan, Vision 2020, aims to increase per capita GDP 4x to US$900 and turn the country into a technology hub for Africa. The focus on investment in the Information, Communication and Technology (ICT) sector is particularly interesting to us given our backgrounds in digital media. The government has invested in building out the fiber infrastructure around Kigali and laying cable across the country, and has also purchased rights to the Eastern Africa Submarine Cable System, which should significantly expand communication capabilities and decrease Internet access costs. The government also has plans to link up schools to the Internet to help drive education quality.

It’s not all roses here, of course. Three-quarters of the population still live below the US poverty line of $1.25 per day, much of the country is still without running water and electricity (daily power and water outages are common in Kigali as well) and physical infrastructure still has a long way to go, but the country is on an amazing path given its history and we’re so glad to have the opportunity to visit on this trip.