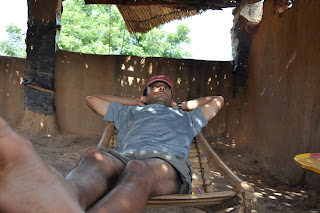 The pace of life in Dogon country was slow and relaxing, in part because it was so hot. I picked up a new french phrase along the way -- Il fait chaud! (translation: It's hot!). We started hiking early in the mornings, stopped for lunch and a long siesta to avoid the noon sun, and continued on in the late afternoon heat to our next destination and the campments where we stayed overnight. Meals consisted of rice or pasta with a vegetable sauce (plus chicken at dinner for the non-vegetarians), and the campments provided mattresses on the roof to sleep on. The next morning we'd wake up at sunrise to a orchestra of roosters, goats and donkeys...

Along the way, we visited several Dogon villages, learned some interesting tidbits from our guide and made a few observations of our own: