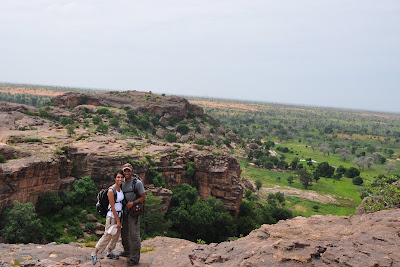 Dogon Country is the homeland of the fascinating cliff-dwelling Dogon people, known for “a culture that remains virtually un-mechanized and practices an arcane animist religion requiring elaborately costumed dances and blood sacrifices.” (NYTimes) We saw Dogon Country on foot, trekking and camping along the escarpment for three days and two nights. The landscape is absolutely stunning. It felt like we had reached the end of the earth. On the first day we descended from the village of Djiguibombo (pronounced jiggy-BUM-bo) to Kani-Kombolé and as we walked toward the edge of the escarpment, there emerged the sweeping expanse of plains below, with no sign of human life as far as our eyes could see. At first I couldn’t decide what movie I felt like we were cast in, but after hearing that everything we were looking at was once underwater and seeing the waterfall trickle from the top of the escarpment down to the village of Teli, I knew it was Ice Age.

Kruti and I are not big camping people but the night we spent camping in the village of Begnimato was outstanding. We slept on thick mats on the roof of a mud hut, wind whistling through the trees, temperature on the cool side of comfortable, a massive ten-story rock for scenery, and a mosquito net for romance. And the stars were magnificent. There’s no electricity in Dogon villages so the night was dark and the stars shined bright. I happened to wake up at 2am since we had slept at 8pm and just watched the sky for an hour or two.

Dogon Country was definitely one of the highlights of our trip so far. 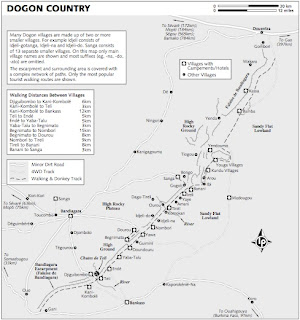